The Harpswell Heritage Land Trust has completed its “Forever Campaign,” raising $2.14 million to create an endowment and acquire a 57-acre preserve on Great Island.

With support from more than 200 donors, the campaign surpassed its goal of $2.1 million before concluding around Labor Day weekend, according to HHLT Executive Director Julia McLeod. Mike Dana carries glass and metal away from an old farm dump on the future Anna M. Tondreau Preserve. A volunteer cleanup day was one of the last steps before the Harpswell Heritage Land Trust closes on the 57-acre property (Gina Snyder photo)

Of the $2.14 million, $500,000 will cover the purchase price of the future Anna M. Tondreau Preserve on Great Island. Another $65,000 will cover stewardship and transaction costs. The Land Trust hopes to close on the property in the first quarter of 2023.

An endowment will ensure the Land Trust can fulfill its mission regardless of how membership or support might change in the future.

“Our income stream comes largely from membership and we are really fortunate to have really dedicated members,” McLeod said.

But an endowment will “help support us as a growing organization, help us do more for the community, because it’s not just about land protection,” she said. “The endowment’s going to support all the areas of our work.”

Wendy Batson, president of the HHLT Board of Trustees, said that diversifying the organization’s income was “critically important — a legal and moral obligation.”

The Land Trust embarked on the Forever Campaign about three years ago. When the opportunity arose to purchase the Great Island property, it merged the campaigns. Batson said the pandemic interrupted the campaign’s momentum, but work intensified again by mid-2021.

Half of the purchase price for the Tondreau property will come from Land for Maine’s Future, a state-funded conservation program. Strong support from the neighborhood was also important. Many donors from the neighborhood have connections to the Tondreau family, while others simply “love that piece of land and really want to see it preserved,” McLeod said.

The property has more than a half-mile of shorefront on Mill Cove and Orr’s Cove, two inlets of Quahog Bay. Its conservation will protect the vulnerable bay from the effects of development, according to Land Trust documents.

The property could accommodate 20-25 residences under shoreland zoning, according to the Land Trust, which has described it as one of the largest undeveloped parcels in town.

The property also gives the Land Trust a large preserve — and the public an opportunity for outdoor recreation — in an area of town with fewer preserves.

An appraiser set the land’s value at $1.65 million, but the owners offered it to the Land Trust for $500,000. The Land Trust and the owners signed a purchase-and-sale agreement in September 2021 that gave HHLT two years to raise the money.

The name of the preserve will commemorate the legacy of Anna Tondreau, a member of a family whose connection to Harpswell dates back more than 100 years. Her father-in-law, Adjutor Tondreau, was a French Canadian immigrant to Brunswick who worked his way up from shining shoes at the train station to become a successful grocer.

In 1917, Adjutor Tondreau, with three of his brothers and two brothers-in-law, bought 20 acres in Harpswell, at the end of what would become known as Tondreaus Point. In the years to come, the family acquired more land on and around the point.

Anna Tondreau bought the 57-acre forest, just northeast of the point, in 1996. She wanted to prevent the property’s development and keep the neighborhood quiet for her husband, who had Alzheimer’s disease.

Anna Tondreau died in 2018 and the land passed to her five children, who wanted to conserve the “magical, virgin forest” and offer an opportunity for fellow hikers to enjoy “nature’s beauty and majesty,” according to Rod Tondreau Jr., one of the siblings.

Before the Land Trust closes on the property, it has to meet requirements from Land for Maine’s Future. An environmental assessment of the property turned up “an old farm dump,” McLeod said, which the program asked the Land Trust to clean up.

Volunteers cleaned up the site on Oct. 5, working for about an hour to fill a pickup truck with rusted metal and broken glass.

After closing, the next step will be the construction of a parking lot and a trail system. “We’ll have a loop trail on the upland portion of the land and then probably a spur trail down to the shore,” McLeod said.

The parking lot and trailhead will be on Harpswell Islands Road, across from the Harpswell Community School driveway. In the future, McLeod hopes to see the school take students across the street to explore the preserve.

Construction of the parking lot could happen next spring, depending on the closing date and the availability of contractors. Volunteers will then build the trail network, which could open by fall 2023.

“We have amazing trail volunteers in this community,” McLeod said. In early October, those volunteers were finishing a new trail system on HHLT’s Helen and Walter Norton Preserve, on Birch Island in Middle Bay.

The Tondreau Preserve will be open for hunting. Land for Maine’s Future requires projects it supports to allow hunting “and it’s something we like to support anyway,” McLeod said.

Batson, the board president, offered a “heartfelt thank you” to donors, as well as the organization’s staff, trustees and volunteers. Their contributions are “evidence of the love we all hold for this community and what it gives us,” she said.

“Together, we have secured the future of the Harpswell Heritage Land Trust,” Batson said.

Editor’s note: An earlier version of this article on Page 1 of the November print edition reported that the Land Trust hoped to close on the Tondreau property in November. Because of a “paperwork delay” with the Land for Maine’s Future grant, the Land Trust now expects to close in the first quarter of 2023, according to McLeod. 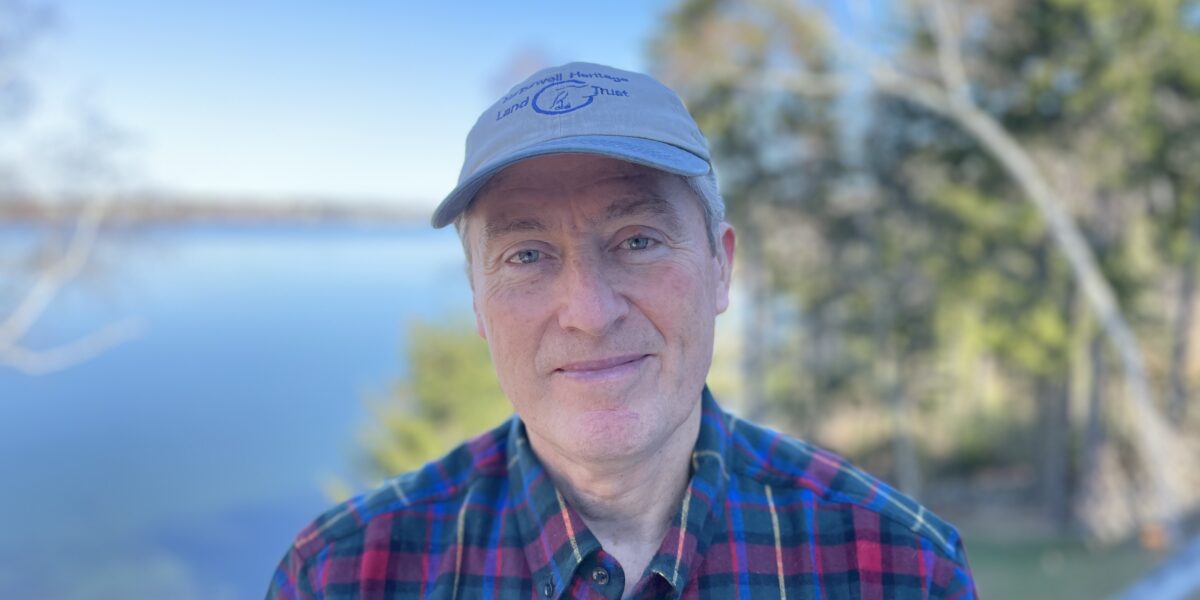 Holiday Gifts support HHLT November 23, 2022 Are you looking for a way to support your local land trust this holiday season? Visit our online store for gifts for all ages! Books &... END_OF_DOCUMENT_TOKEN_TO_BE_REPLACED
Harpswell's Preserves & Trails