Originally published in the October 2020 issue of the Harpswell Anchor

Sixty acres of clam flats and 68 acres of eelgrass beds, a fringing salt marsh, wading bird and waterfowl habitat strewn with rockweed, an iconic view from the town office looking south into Harpswell Sound: the intertidal zone and shoreland at the mouth of Strawberry Creek has long held the attention of shellfish harvesters and conservationists alike. With the availability of two properties at the east side of the creek’s mouth, the opportunity to either protect or develop this habitat is at hand.

“The view is important, but the highest priorities are protecting the quality of the valuable intertidal resources and eelgrass beds,” says Reed Coles, Executive Director of the Harpswell Heritage Land Trust (HHLT), which has launched a campaign to raise the funds necessary to purchase the properties.

“Marsh, mudflats and eelgrass beds are used by a variety of commercially valuable species – like clams and lobsters – as nursery habitat during the early stages of their life cycle and for food and shelter throughout their lives,” Coles explains. “Those habitats are also important to many species of resident and migratory birds which are sensitive to disturbance and development.”

The watershed area itself stretches from just north of the Mountain Road bridge past the mouth of Strawberry Creek to the west of the town office and continues southeastward toward Lombos Hole. Looking south from the town office, Strawberry Creek Island (also known as Stover’s Island), owned by the State of Maine, sits in the mouth of the stream. Just to the east there’s another small piece of land, surrounded by water at high tide but connected to the nearby point at low tide. The properties HHLT would like to acquire include this spit of land, the point it connects to and forested upland to the northeast.

As of mid-September, HHLT has raised $207,000 of $350,000 needed to purchase both properties. Recently, a donor has offered to match every dollar donated to The Strawberry Creek Project with a dollar to HHLT’s endowment, up to $73,000.

“We have or are applying for several grants and hope to raise some of the funds that way. I’m estimating that we’ll need about $270,000 in donations in order to make the purchase.” Coles says. If HHLT is successful in raising the money, the closing date is scheduled for March 31, 2021. If funding is not available, the properties will be listed on the real estate market for development.

The trouble with development is multi-tiered according to Coles, who explains that the way the land was divided up initially could allow for three homes and three docks to be constructed on the two properties.

“Docks in this location would likely be short-tide docks,” he explains. “The dock itself would be short, with a long ramp attached to a float. At low tide, the ramp and float would sit on the mudflat, harming the resources that live there, or would shade and kill eel grass.”

Mark Eyerman, Harpswell’s Town Planner, makes the point that this area was initially zoned as a subdivision, however, because the lots for sale are located within 250 feet of the water, they’re considered to be in the Resource Protection District. This restricts development to a single-unit home on each building lot with prior Planning Board approval if certain conditions are met. As a part of a subdivision, the homes could each install a private dock unless the subdivision includes a “community dock.”

Harbormaster and Marine Resource Administrator Paul Plummer says, “while not all development is bad, we do know that shellfish are very sensitive to their surroundings. Even minor disruptions to the water quality can have big impacts.”

“Any upland development is always a concern to a natural resource,” he says. “Mother nature does a good job at filtering natural run off, however when you add impermeable surfaces and shape the topography to fit the needs of development, there can sometimes be consequences to disrupt the natural environment.”

Coles also calls out the role run-off can play in changing water quality. While shoreline septic systems can remove bacteria from household wastewater, they don’t remove nitrogen, which can enter the water as run-off and cause algal blooms, especially when combined with phosphorus. The fast-growing algae blocks sunlight from eelgrass beds, reducing photosynthesis. It also smothers mudflats, killing the animals that live there by depriving them of oxygen.

Sea level rise factors into the impact of land development here, too. Coles notes that the point is considered a bluff. It’s not rocky like much of Harpswell’s shoreline, but rather composed of gravel.

“Although the top of the bluff sits about six feet above mean high tide, it will erode as the sea level rises bringing any development closer to the shore and reducing the buffers created by required setbacks. In the next century this point could see a lot of change,” he says.

On the positive side, Coles explains, eroding bluffs will “feed the flats,” meaning that the sediment accumulates on the mud flats while eelgrass and rockweed can trap particles and maintain mean depth as sea level rises.

“Marine plants and seaweeds cushion the impacts of wave action on the shore. If we lose them the whole system is more stressed,” Coles says.

In 2014, the clam flats at Strawberry Creek were closed to clam and worm harvesting while a study was being done to determine the impacts of invasive green crabs and loss of eelgrass beds on the diminishing numbers of clams. According to Plummer, the flats are back open to all harvesting, “but the softshell clam hasn’t completely rebounded after the green crab predation,” something that has been of concern statewide.

Plummer notes that he is seeing an increase in quahog populations, which tend to thrive in the slightly warmer water temperatures that the Gulf of Maine has recently experienced and are more resistant to green crab predation. Based on a 2019 shellfish survey, Plummer predicts that there are presently an estimated 271 bushels both of legal size and undersized soft-shell clams at Strawberry Creek.

Those interested in making a donation to support HHLT’s purchase of these properties can do so by sending a check to HHLT, PO Box 359, Harpswell ME 04079 or by contacting Reed Coles at 207-721-1121 or online at www.hhltmaine.org/strawberry-creek/. 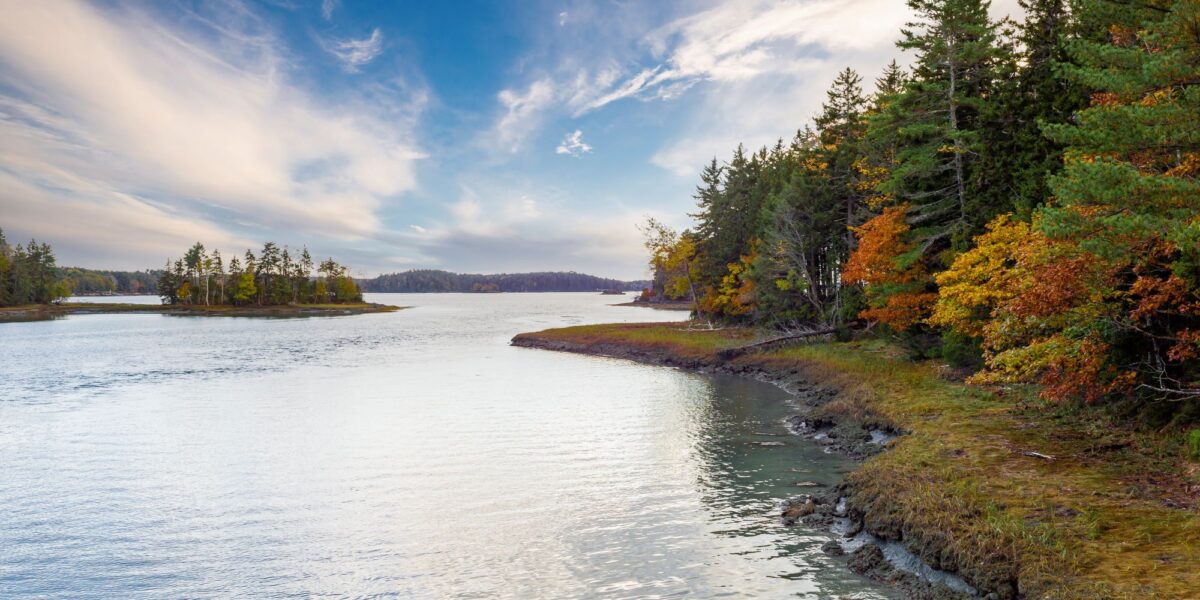 HHLT’s First 40 Years January 10, 2023 2023 marks a substantial milestone for Harpswell Heritage Land Trust: we are now 40 years old! From our formation by the Harpswell Historical Society, to... END_OF_DOCUMENT_TOKEN_TO_BE_REPLACED
News and Updates Holiday Gifts support HHLT November 23, 2022 Are you looking for a way to support your local land trust this holiday season? Visit our online store for gifts for all ages! Books &... END_OF_DOCUMENT_TOKEN_TO_BE_REPLACED