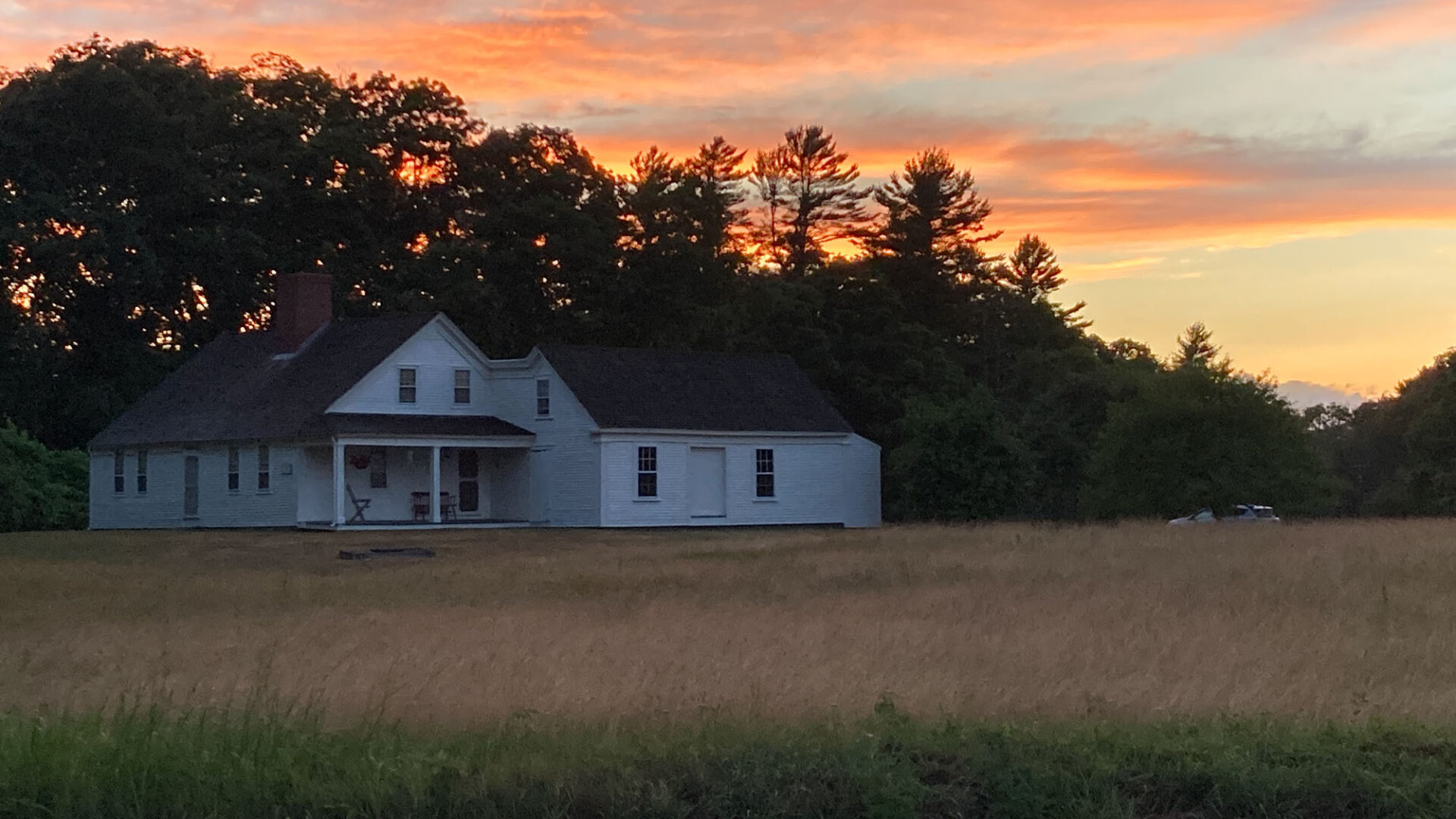 The Tarr-Eaton house is set against the backdrop of HHLT’s Hackett Preserve. (Nancy West photo)

The beauty of Harpswell encompasses far more than its natural scenery, its views of ocean and sounds, woodlands, and farmlands (all top-notch). Its historic architecture is also eye-catching and distinguished. Harpswell Heritage Land Trust (HHLT) plays a role in preserving five of Harpswell’s splendid old buildings. That’s unusual for a land trust, which typically protect only land, and it arose from the need for an entity to hold an easement protecting the historic Tarr-Eaton house. I won’t focus on the evolution of HHLT here (click here for a history), but will instead focus on a few of the protected buildings.

First a note of explanation. HHLT has numerous preserves available to all of us and our dogs to explore. “Preserve” indicates that HHLT owns the property outright and welcomes us to use it so long as we follow the rules. In addition to its preserves, HHLT also holds conservation easements on many parcels of land. These are legal agreements created with private landowners who, thankfully, voluntarily forego the right to subdivide their land for development. In my experience, landowners do this because they love their land. I’ve witnessed men in their 60’s choking up when explaining why they placed their land—their family homestead or farm—under conservation easement.

With HHLT, a third vehicle benefits our community in perpetuity. Some people who own historic buildings elect to place them under preservation agreements. Like with conservation easements, preservation easements are custom written with owners but preserve historical features of their properties. For example, owners might be required to maintain their house’s façade, including doors and windows, trim, and paint colors appropriate to the era, style, and history of the building. The document might limit expansion of the building footprint. It might require maintaining a view from the road so that our grandchildren’s grandchildren can still see the building.

Unlike preserves, conservation and preservation easements are not necessarily open for public access. Of HHLT’s five preservation easements, only two are visible to the public: the Tarr-Eaton house and the old Union Hotel. Both carry the extra cachet of having been listed on the National Register of Historic Places. I’ll focus next on those buildings and then will mention the other three historic homes under easement.

The Tarr-Eaton house was built immediately north of the Old Town Meeting House around 1783-84. That date, from research by architectural historians, is based on the assumption that William and Elizabeth Tarr had the house by the birth of their first son, Richard, in 1783. The idea is corroborated by the town’s 1784 census indicating a homestead on the Tarr’s 105-acre farm. The Tarrs’ work was probably not limited to farming, though. In 1784 and 1785, William Tarr was listed in Cumberland County records as an “Innholder” with “License to keep Tavern & Retail Spiritous Liquors for one year next ensuing….” Perhaps town residents needed a way to keep warm while participating in afternoon Sunday services next door.

The house is important as one of the oldest houses in town and as a representative of what an ordinary late 18th century coastal Maine family would have lived in. It is a one-and-a-half story, frame Cape house. “Cape,” as I have learned recently, implies a typical New England organization of space that was sturdy enough to stand up to the weather of Cape Cod (or Harpswell). The main part of the house faces south and was built with a center chimney on the “hall and parlor plan.” That term implies two rooms back to back, with the bulk of family life in the hall where the cooking took place and a smaller, more private, parlor. There were two rooms upstairs.

The barn that fronts the road was joined to the main house in the 1840s or 50s. At the same time, the porch was added. The date is based on architectural details: pillars supporting the porch roof, the wide trim under the wide eaves, and the pseudo pillars flanking the corners (“pilasters”). They are typical of Greek Revival flourishes common to those decades and were definitely in place by the 1880’s when a photographer shot slides. Click here to see them.

While we see the Greek Revival influence on the south and east facades, original Federal style details persist on the north and west sides. When the Eatons added the barn and unified and updated the public face of their home, they left the back half in its original simpler, Federal style, trim. The Federal style was fashionable from about 1780 to 1840.

I couldn’t have described these details or told you what a Federal style or Greek Revival style is without the description for the National Register of Historic Places application, Google, and A Field Guide to American Architecture. (When I think of field guides, I think of bird books one can stuff in a pocket. This one is bulky and weighs well more than a brick. Not convenient to carry, but helpful viewing houses from a car.) The second building you can see is at the pinnacle of Cundy’s Harbor. Look for the octagonal cupola at the top of the hill, across the road from the library, and you’ll find the “oldest known surviving coastal resort hotel building in Maine”**. Now the Captain’s Watch Bed and Breakfast, the building started as the Union Hotel in July 4th, 1862. Daniel Simpson advertised his hotel in the Brunswick Telegraph:

“The House has been erected during the present season, and everything about it will be new and in the best style and taste. It has a commanding position, the most elevated on the point and it affords a magnificent view of the ocean, the headlands about the mouths of the Kennebec and New Meadows rivers, and a wide stretch along the latter river.

The FISHING for the smaller varieties is fine in close proximity to the House and a sail for four or five miles takes you at once upon the cod and haddock grounds where fishing to an indefinite extent can be had during the season.

A fine YACHT of 17 tons, provided with every appliance, is owned by the proprietor. Beautiful groves can be reached in a ten minutes’ walk in almost any direction from the House.”

Unfortunately for the Simpsons, the attractions of Cundy’s Harbor and the exacting style and taste of his hotel were not enough to stay solvent in the middle of the Civil War. The hotel was auctioned at a Sheriff’s Sale in July,1863. Subsequently, the building was used as a church and school and again as the Union Hotel, the Cliff House, and the Percy Hotel until 1905. It became a private residence, then a B&B since 1986. Because of its historical value, the old hotel merited inclusion on the Historic Registry.

Architecturally, the building’s look is understated except for the striking cupola. Its timing places it post-Greek Revival. However, you can see corner pilasters and wide trim beneath the eaves, like Greek Revival designs. The much wider overhang of the eaves on the hipped roof, by comparison, is typical of the Italianate style popular from 1850 to 1880.

Three other houses are in HHLT’s purview. Two are adjacent salt-water farms north of Harpswell Center. Each is about 50 acres. One was founded in 1747, with the common configuration of a house with sheds and barn attached, built in 1874. The other was settled in 1732 and farmed until 1953. Its house was built in 1839. It is the only brick Greek Revival Cape house known to have been built in Harpswell. In both of these historic farms, the land is conserved and the eastern facade of the house is preserved.

The Kellogg-Dunning house, the fifth HHLT preservation easement, tells an astounding and delightful story. Purchasers of a small house on Harpswell Neck rallied to rescue a wreck with a long history.

Based on Federal style details such as moldings, trim, mantels, and paneling, experienced architectural historians judged the Kellogg-Dunning house to have been built as a typical hall and parlor house between 1800 and 1810 for the Merryman family. There were two rooms downstairs and one up. Waitstill Merryman sold it to the Orrs in 1843, who added an ell with Greek Revival trim before about 1850. With five children and another farmer living with them, they must have desperately wanted more space. In 1854, the Orrs sold it to Robert and Charles Dunning. After several more owners, John and Annabelle Kellogg bought the property in the 1980s and started the process of saving the historic and decrepit house.

Ultimately, the Carr family bought it with the agreement that they would restore it. And they did so. They dismantled the entire house, moved the pieces, including the bricks from the fireplaces, to Wissman’s Point, and reconstructed the whole shebang as a giant 3D jigsaw puzzle in the early 1990s. As they dissected clapboard, shingles, and supports, the Carrs found hand-forged nails. Nails forged by blacksmiths gave way to machine made ones at about 1800. They also exposed a faint cryptic number, 1781. The date of construction? These clues revealed during deconstruction fit with a 1784 tax listing of “1 shell of a house and 1old barn” for the nine members of the Merryman family. Whether a 1780s or early 1800s origin, this old house gained a new lease on life. As with HHLT’s other four historic preservation easements, the building is good to go for centuries to come. Harpswell’s Island Heritage October 7, 2022 Introduction Harpswell Township is home to almost half of Casco Bay’s more than 200 islands, listing 98 islands within its borders. Four of these are... END_OF_DOCUMENT_TOKEN_TO_BE_REPLACED
Harpswell History Profile: Sam Alexander March 9, 2022 Sam Alexander, Sr. knows Harpswell pretty well, which is not surprising since he’s spent most of his three score and ten years here (so far).... END_OF_DOCUMENT_TOKEN_TO_BE_REPLACED